A bunch of friends yearning for excitement broadcast a free radio station from their hometown in the countryside. Jerome leads it with unique charisma while Philippe, the technical genius, lives in the shadow of Jerome, his big brother. When called for the military service, Philippe has no choice but to leave for West Berlin. He’s determined to keep on broadcasting, but realizes that he just lived the last glorious moments of a world on the verge of extinction.

With the support of Mitteldeutsche Medienförderung, FFA CNC Mini-Traitè, DFFF

ANOTHER REALITY is a character-driven documentary which provides a real insight into the life in parallel societies in Germany, ruled by Hip Hop music. 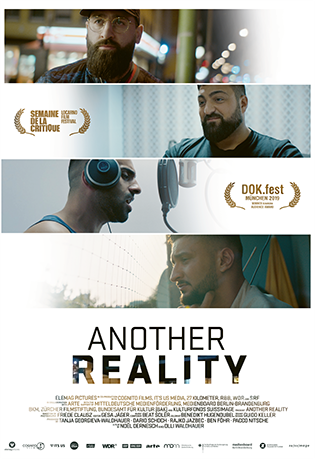 In Co-Production with RBB, WDR, SRF / SRG SSR in collaboration with ARTE

All nations denounced slavery, but it still exists and flourishes in many countries. A slave costs about USD 300-400. Their life has a price and the price for a human being is even less than the latest smartphone.

Some people's lives are as eventful as a good novel. 88-year-old Siegfried Wanka has lived such a life. He was a gambler, a notorious womaniser, always crossing lines. Wanka has always lived in the shadow of power, as an interpreter for Walter Ulbricht, agent leader of the Stasi in Vienna, party official, arms dealer, and profiteer. He never really cared about morality - it was always about survival In his life's novel, this short film recounts the preface. The story before it became history, of a 16-year-old who was almost shot dead on Sylt at the end of the war. Who sank with a minesweeper off the coast of Schleswig- Holstein and survived. Who was given a second chance at life and wanted to make good use of it. A refugee stranded in Mecklenburg-Western Pomerania, full of ambition to make something of himself.

written and directed by Andreas Pichler

The odd house on the outskirts of a small town has become a haven for survivors and castaways of all coloratura. A safe place and open experiment.

The „House of Solidarity“ is going to rack and ruin, but it is the beauty of the city of Brixen in South Tyrol at the edge of the forest. On taking a closer look, you discover something completely unexpected. Site not shrouded in mystery, but a highly colourful and lively biotope of extremely different destinies. Forty, fifty people live in this house. Thieves, the homeless and the jobless, addicts and refugees from half the world. Their biographies read like a collection of diverse life stories that have only one thing in common: they are all stranded, often failed in life. Here they find a temporary safe place home and live together.

This cannot work out well, said the residents wrongly over 10 years ago when the house of solidarity came alive. But the impressive social experiment was successful.

In the narrative time frame of few months, the documentary THE SIXTH CONTINENT is capturing the utopic moment in a very intimate and poetic manner, which is the peculiar thing about this place.

Soon, everything becomes very different in the house of solidarity. The missionary order that provided it, wants it back. The future is open.

Written and directed by Hans-Dieter Grabe

The documentary director Hans-Dieter Grabe  reflects on a year that was not only special but also dramatic for him.

"On April 17, my father, a colonel in the Luftwaffe, suddenly returned to us from one of the theatres of war. Shortly thereafter, howling sirens drove us and the other residents into the air-raid shelter. Then the longest air-raids to date began in Dresden. An aerial bomb missed our house by just a few metres, but a firebomb hit it. My father in his undone uniform jacket tried, in vain, to flag down a fire brigade in front of our burning house. We, however, were unhurt, my father was with us, and just three houses down we found shelter.

My parents didn't know what to think about the impending cease-fire. That, I couldn't understand. The weapons would be stopped, and I would no longer have to be afraid of bombs. Not a single shot was fired when soon thereafter the Red Army marched into Dresden. I saw how afraid the grown-ups were of the Russians. But I could also see the Russians' weariness. I liked their singing. The gardens around the ruins became playgrounds for us children. Stolen fruit filled our empty stomachs.

The Russians took my father. My mother and I hoped to find him behind bars in the Dresden prison. Then after many weeks a miracle occurred. My father was released for health reasons from the former Buchenwald concentration camp, which was now being used as a special camp for Soviet secret police. I learnt about the atomic bombing of Hiroshima and Nagasaki. A single plane with a single bomb destroyed an entire city. What would have happened to us if there hadn't been a cease-fire?

A new school year began. The young teacher did not hit our fingers with a long ruler anymore. I loved her. And then when my summer of '45 was coming to an end I loved yet another young woman: a tightrope walker. She balanced from the Hofkirche steeple above the Elbe. Under her feet my parents and I stood in a tightly packed sea of people. All of us stared up holding our breath.  We were spellbound not because we were afraid of bombers but because the truce had held after all."

Lukas, an interpreter for a military mission, gets lost near a remote Ukrainian village and stumbles from simple misadventure into the weirdest road trip of his life.

Nikos, an excellent tailor, sees his life collapsing. His daughter has turned his back on him, his father is sick and needs money for his care and their sewing workshop is on the brink of bankruptcy. He then has the idea of going to his customers since his customers no longer come to him. He launches an itinerant workshop which quickly becomes the attraction of the popular districts of Athens. It turns out to be THE wedding dress specialist. Life finally seems to smile again when he learns that the family workshop will be seized. Moreover, his traveling workshop is destroyed by the jealous husband of his neighbor who helps her to make the ordered clothes. And it is by making the wedding dress of his daughter, who will find a meaning to his life.

In times of society conflicts around clima change and gender identities, several men and one woman embark on a tragic and humorous journey to begin a new chapter in their lives, triggered by the closure of of their gloomy workplace: the last German underground coal mine.

Production: Elemag Pictures I Germany in Co-Production with Cognito Films I Switzerland

In co-production with ZDF Kleines Fernsehspiel, SRG and with the support of MDM, BKM, DFFF, BAK (Schweiz) and Stiftung Zentralschweiz

Fikret is the director of the country's oldest zoo, which is supposed to go private. There is only one final obstacle on the way to privatisation: the zoo's oldest denizen, an Anatolian Leopard protected by law as "an endangered species.”

Tato Film I Turkey in Co-Production with Elemag Pictures I Germany, Adomeit Film I Denmark and Donte&Lacroix I Poland

Turkey, Germany I experimental I non-fiction I 84 min I 2020

The same route after three and a half centuries... A creative documentary following the footsteps of the Ottoman-Armenian intellectual and traveler Eremya Celebi Komurciyan into the cosmopolitan Istanbul of the 17th century. Long before the invention of cinema, Komurciyan situates himself as a subject who observes the city of Istanbul as if he had a camera in hand. Borrowing Komurciyan’s timeless cine-eye, we delve into contemporary Istanbul to capture what is “inaccessible to the human eye” through the remnants of his route.

Fenafilm I Turkey in Co-Production with Elemag Pictures I Germany

With the support of medienboard Berlin-Brandenburg

Based on a true story

Sofia 1943. Christo, a local bar owner, is determined to save a wounded 16-year-old Jewish girl, who jumped off the train from Thessaloniki to Auschwitz, after stabbing a Nazi officer to death. Meanwhile, he develops an intimate relationship with the Jewish psychiatrist treating his wife in a mental sanatorium.  An SS officer is coming to Sofia to find the Jewish Girl.

Written and directed by Sharon Bar-Ziv

Founded in late 2014 by Borislav and Viktor Chouchkov, Jan Krüger and Tanja Georgieva-Waldhauer elemag pictures trademark are a very high-artistic quality and remarkable human stories of originality, capable of engaging audiences around the globe.